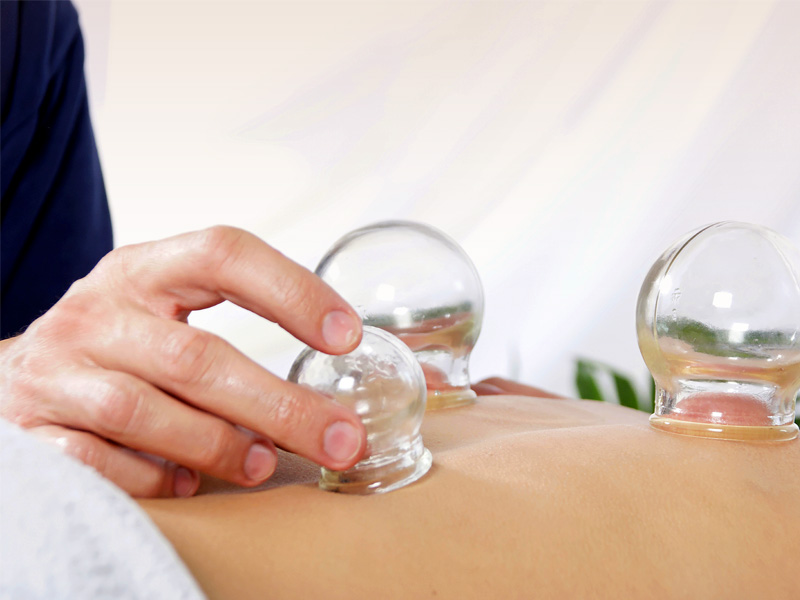 Cupping – a non-pharmaceutical therapy, a component of traditional Chinese medicine.

On August 8, 2016, NYtimes.com posted an article titled “What are the purple dots on Michael Phelps’s? Cupping has an Olympic Moment.”

In recent years, professional doping scandals have worried by many athletes who did not doping but won their competitions. Because of hard training daily, many of them have soft tissues injuries or muscle fatigue. More and more sportsmen look for non-drug therapy for quick healing. They found cupping is one of the quick modalities in traditional Chinese medicine to relief muscle and tendons ache, sore, or tiredness. The result of effectiveness ranges from a few minutes to next morning. Some people asked me including medical students where I give the elective course of introduction of Chinese medicine, Health Science Center, University of Colorado Denver why some people show the marks and some do not. Before answering this question, let us first take a look history of the cupping therapy. The first official record of the cupping therapy was written by a Taoist as well as a herbalist, Mr. Ge Hong (281-341 AD) in China in his book: A Handbook of Prescription for Emergencies. During that period of time, cups were actually animal horns to eliminate pus in the skin or soft tissues. In the Qing Dynasty (1644-1912 AD), the book complied by Mr. Zhao Xuemin titled Supplement to Compendium of Materia Medica dedicated an entire chapter on cupping. This book emphasized the value of this therapy and mentioned to place fire inside of pottery or bamboo cups, etc. Today, the most popular cupping methods are fire cupping in special glass jars or pumped cupping without fire.

Mechanism of cupping is to withdraw air from the inside of a cup-like device via fire or a pump. When vacuum is created inside of a cup, the cup will automatically suck on the surface of the skin and instantly lifts up the skin as well as soft tissues below the skin. Suction forces vary depending how much vacuum produces. Generally, the fire cupping produces more force than the pumped cupping. From the picture on the blog of New York Time, Michael Phelps received was the pumped cupping. The advantage of the pump cupping is easy to learn and light weight for traveling with. The fire cupping induces not only stronger suction but also warmth. Therefore, the fire cupping produces not only suction but also heat for the tissue on the spot. This gives the fire cupping advantages to relief the pressure or pain locally but also warm the focal area to speed up the healing process. For severe pain, a provider especially a licensed acupuncturist will lance the painful spot to generate a couple of drops of blood before applying a cup on. It will produce the better result. Children can receive a gentle cupping without bleeding or cup retention.

Cupping provides a lift of soft tissues where to provide room for better blood circulation, lymphatic drainage, and re-arrangement of muscle tension. It is one type of fast myofascial release. Each spot can be cupped for a few seconds up to 10 minutes. Multiple cups can be applied in the surround-injured area quickly or alternatively. Leaving a cup on one spot longer than 10 minutes particular in a hot weather or use a fire cup can risk blisters or possible skin infections.

Cupping can be used in any painful area (without open wounds), acupuncture points or trigger points. Cupping can be placed in a fixed spot for 5-10 minutes or moving up and down with any type of lubricant along acupuncture meridians or along directions of muscle fibers. Cupping is a mechanic stimulation to trigger chemical reactions in the focal area as well as in the brain to relieve endorphin and other natural painkillers in addition to regular blood and lymphatic flow as acupuncture does. It is a non-pharmaceutical therapy indeed; therefore, there is no worry about doping for anyone including athletes throughout the world today.

The difference of the cupping from the myofascial bodywork is cupping lifting up tissues instead ofpressuring down tissues.

The current issue involved cupping is most of the people performing cupping lack of proper training except licensed acupuncturists in this country. There are a couple of photos on the Internet that cupping was done wrong by non-acupuncturists to cause tissue severe blisters or tissue necrosis. We caution people that only receiving the fire cupping via license acupuncturists because they had a formal training and many hours of practice under supervision in school.